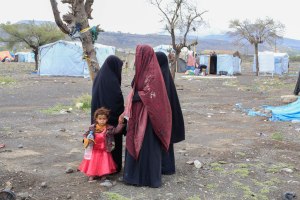 It’s very possible that over the next decade, Eurasia is going to add an equivalent in population growth exceeding that of an Istanbul or Cairo-sized megacity from a source greatly underestimated by the security and humanitarian community.

That source is Yemen. The country torn apart by civil strife, international conflict including Saudi and UAE air strikes, insurgency, and famine comprises a major component of the United Nation’s “worst humanitarian crisis since World War II.” And according to the World Health Organization, the nation’s entire health system is on the “brink of collapse” with 17 percent of facilities completely nonfunctional.

As poignantly stated by Hassan Boucenine, head of the Doctors Without Borders’ Yemen operation, “the whole population may soon need humanitarian help…How can a country that imports 90% of its food and 100% of its drugs and that can only access a small portion of these not be in trouble?”

The trouble gets worse. Yemen is quickly running out of water. With an explosion to a population of 27 million, a dependence on water-intensive qat production, and a relentless draining of aquifers, “Sanaa could the be the world’s first capital city to ‘run out of water’ as groundwater reserves simply dry up,” according to ThinkProgress.

Currently, of Yemen’s population of 27 million, approximately 2.7 million are internally displaced. 170,000 refugees from its diverse population are fleeing to the Horn of Africa, Djibouti, Saudi Arabia, and Oman.

It is a baseline from a humanitarian and security perspective that can be augmented from in future scenarios.

With its health system in a full state of collapse, insurgency ongoing, and water likely to run out, anything less than an exponential projection of potential disruption is unlikely. For the purpose of this analysis, a 10-year lower-bound analysis showing an exponentiation level of 2x (and a conservative assumption of zero population growth) shows 5.4 million internally displaced and 340,000 refugees in approximately 10 years. That’s about 5.8 million displaced, but primarily within the confines of Yemeni borders. The displacement equivalent is about that of Taipei, Taiwan or Johannesburg, South Africa. Destinations for external migrants remains the Horn of Africa, Gulf States (Saudi Arabia, Iran), and perhaps maritime routes to South Asia–Pakistan, India, and Bangladesh.

But let’s turn up the volume on the scenario even more exponential due to abrupt climate disruption. Adding a scenario of a Blue Ocean Event eloquently described by University of Ottowa climatologist Paul Beckwith that involves a 10-year transition to a full open Arctic after the first summer ice free event would accompany a global temperature increase of approximately 3C above baseline. This temperature rise, triggered about a decade after the onset of the first summer event would expand uninhabitable zones in the tropics and Middle East/North Africa.

This would include making pockets of Yemen potentially uninhabitable–a reasonable proxy is the work of the Max Planck institute showing a “business as usual” rise of 5C by the end of the century across much of the Middle East per below:

Extending the same geographic impact to a more sudden onset Blue Ocean event scenario would plague Yemen with far too many days where wet bulb temperatures would exceed 35C. If water resources do indeed dry up, and the health system remains collapsed, the exponentiation rises further–perhaps over 24.3 million refugees surging north through the Middle East, Turkey, deep into Europe and Asia, far greater than that of New York and trailing only Tokyo for a megacity equivalent. It is assumed that, due to warming in the Middle East and Africa, these migration routes are very likely to turn northward.

Splitting the difference between upper bound and lower bound scenarios still results in 7.4 million external refugees and 7.4 million internally displaced–roughly an Istanbul or Cairo-equivalency of devastating humanitarian and geopolitical impact.

With so much barely on the brink of collapse in Yemen already, the Gulf nation is very likely to not survive a Blue Ocean Event warming scenario. The result for Eurasia is likely to be a megacity-equivalent in Yemeni exodus.

Sincere thanks to Jennifer Hynes for the opportunity to be interviewed on a recent episode of Extinction Radio. Catch the full episode and a fantastic video package from Rick Siegenthaler here.

Deep gratitude is also extended to Carolyn Baker for the opportunity to be interviewed on the New Lifeboat Hour, here.

An honor to be interviewed by such exceptional true humanitarians!